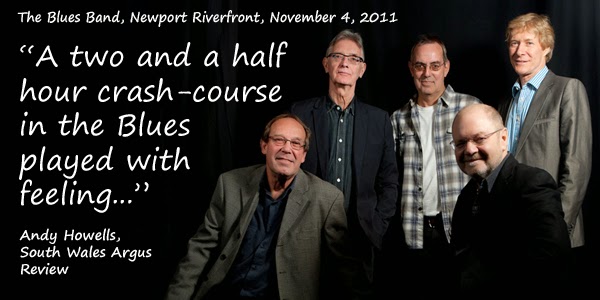 A wet and miserable evening resulting in the postponement of The Newport Dragons V Blues match at Rodney Parade was enough to give any Newport resident the blues on Friday night.  Thankfully The Blues Band were in town to drive away any sadness with good music at Newport Riverfront.

Tom McGuinness, Dave Kelly, Paul Jones, Gary Fletcher and Rob Townsend gave a two and a half hour crash-course in the Blues played with feeling. Along the way name-checking greats such as Chuck Berry, Oscar Brown Jr. and Little Johnny Taylor.

Following the powerful opening of the title track from their new album A Few Short Lines, the band launched into an early Manfred Mann B-side Without You, which featured a soaring vocal from Paul Jones.

One could not help but marvel at the guitar talents of Tom McGuinness (at one point playing a guitar perched on his back) and Dave Kelly mixed with Paul Jones energetic harmonica playing, Gary Fletcher’s deep bass sound and Rob Townsend's drum-beat which tied the band firmly together.

Other highlights included the joint vocals of Paul, Tom, Dave and Gary on How Can a Poor Man Stand Such Times, Gary Fletcher’s Bluesy vocal on You Are True and Paul Jones seeking audience participation with Suddenly I Like You. The concert was rounded off with a two song encore including a version of Curtis Mayfield’s People Get Ready, proving that the blues had never sounded so good.

As I left the gig, I heard one audience member say “That was a much needed boost to the usual Friday night”. He couldn't have been more right.