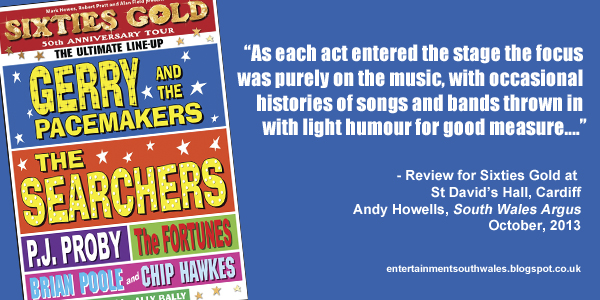 Without a doubt the 1960s was a great decade for music as the opening night of the Sixties Gold tour at St David’s Hall proved last week where no less than five acts performed to a packed house for over two and a half hours.

It might have been the first night of the tour, but the performances from The Fortunes, The Searchers, Brian Poole and Chip Hawkes, PJ Proby and Gerry and The Pacemakers were flawless.

As each act entered the stage the focus was purely on the music, with occasional histories of songs and bands thrown in with light humour for good measure.

The Fortunes still retain the spirit and sound of great hits such as You’ve Got Your Troubles, Storm In a Teacup and Caroline.

The Searchers featuring chart era members John McNally and Frank Allen really picked the pace up and got fans dancing in the aisles to Sweets For My Sweet and Love Potion No.9.

There was a welcome return to two former Tremeloes Brian Poole and Chip Hawkes who performed 6 songs including Silence Is Golden and a hilarious rendition of Do You Love Me.

PJ Proby followed with a fabulous set showing he still has the voice and command to mesmerise the audience with renditions of Somewhere and Hold Me.

Finally Gerry Marsden sang his greatest hits with the current incarnation of The Pacemakers including Its Gonna Be Alright and You’ll Never Walk Alone.

The tour continues around the UK until the end of November, including a performance at Bristol’s Colston Hall on October 4, 2013.