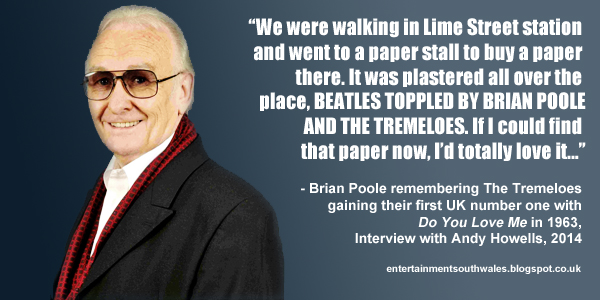 Now celebrating its 29th year, The Solid Silver 60s Show comes to Cardiff later this month with some of the 1960s biggest acts. Topping the bill will be The Tremeloes, reunited with their original frontman Brian Poole, who recently took time out to chat with Andy Howells.

“We used to play Liverpool all the time, we were Liverpool’s second sons,” laughs Dagenham’s Brian Poole as he recalls the moment in 1963 his band The Tremeloes, toppled The Beatles She Loves You from Number One with their single Do You Love Me. “They didn't care we were from London, and we were walking in Lime Street station and went to a paper stall to buy a paper there. It was plastered all over the place, Beatles toppled by Brian Poole and The Tremeloes. If I could find that paper now I’d totally love it. Of course we knew the boys as well and lots of banter went on as you can believe!”

It sounds like the stuff of dreams but this was not the first time that Brian’s group The Tremeloes had toppled the Fab Four, 18 months previously in January 1962, the bands, both relatively unknown, had auditioned with Decca Records for a recording contract.

Brian and his band won out over The Beatles. “George Martin, who eventually signed The Beatles, later told me that everyone turned down The Beatles in those days,” says Brian who thinks hindsight is a great thing.

“The Beatles came and did songs that weren’t suitable for that time, we came and Decca knew our work because we’d already been backing people like Tommy Steele, Johnny Burnette and Gary US Bonds. Decca didn't know about the Beatles writing style. Lennon and McCartney are two of the greatest songwriters in the world bar none, although Decca were quite happy with us; we sold 15 million records for them. “

Brian along with Alan Blakely, Alan Howard and Dave Munden formed The Tremeloes in Dagenham in 1958. Although The Tremeloes were originally a five-piece group, Brian became the front man after he was elected so by the other band members on a bus journey home from a trip to see visiting US band Buddy Holly and The Crickets in East Ham.

“On the way back they went into a bit of a huddle and I said "What are you talking about? Is my shirt hanging out?” They said “No, we’ve just had a chat. We think there’s got to be a front man for the band and we’ve decided its going to be you.” I said “I don’t know I’ll give it a go” and sure enough, it took off that’s the way we did it. They made it easy for me.”

Prior to signing with Decca, Brian and The Tremeloes became a top draw in the dance hall circuit, “Those were the best days. We were playing in dance halls. Nobody sat down; they were all up dancing to us. We got to play all those songs like Do You Love Me and Twist and Shout and if you didn't play them the way they wanted them, they didn't dance to them.”

It was the bands upbeat sound which made them chart mainstays from 1963 until the end of the 60s, although following five world tours, Brian opted to leave the group in 1966. The group of course continued to have further success in their own right with hits such as Silence Is Golden and Here Comes My Baby.

Almost five decades on, Brian is back with The Tremeloes which still features original drummer Dave Munden for the 2014 Solid Silver Sixties Show . The show which visits Cardiff’s St David’s Hall on April 17, will also feature such artists as Chris Farlowe, Chris Montez and Vanity Fair.

“I love the fact that Dave Munden has kept The Tremeloes running to a high degree,” says Brian , “Alan Blakely and I invented that name The Tremeloes and Dave was the only person around at that time, thank God, he’s kept it going. It’s a total pleasure for me to be back with the band that’s a top attraction in their own right and putting me back with them – beautiful!