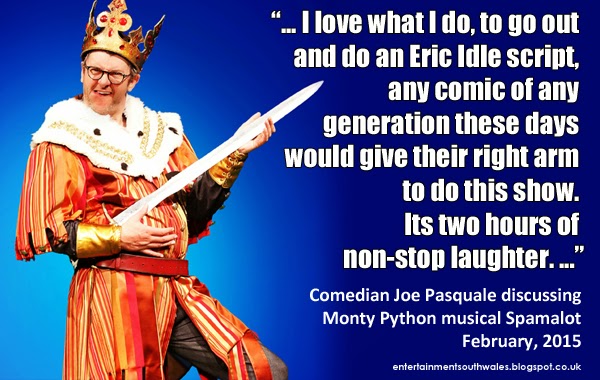 Monty Python’s Spamalot gallops to Cardiff in March as part of its 2015 UK tour featuring comedian Joe Pasquale reprising his much loved role of King Arthur alongside Todd Carty as Patsy.

Lovingly ripped off from the classic film comedy Monty Python and the Holy Grail, Spamalot is a kind-of new musical with a book by Eric Idle and an entirely new score for the new production, (well, almost) created by Eric Idle and John Du Prez.

Can you tell us about the role you’re playing in Spamalot?
I'm playing King Arthur which is one of the best things I've ever done. I love the part and I love the show.  I grew up watching Monty Python so it’s my generation!

How did you get into comedy originally?
I was always such a fan growing up and watching comedy on the telly, Tommy Cooper, Norman Wisdom, Eric and Ernie, Bob Monkhouse, were all great comics I grew up with. Then when I got the chance to go out on stage I was never scared, it was just a case of showing off. I had two older sisters and a younger brother, I was the one in the middle who had to find his own entertainment and I think that had a bearing on trying to get noticed.

When you got into comedy and started getting noticed what that like was for you?
I only ever wanted to get up on stage, I never thought of it as a long-term career or making money from it, it was just a way of showing off  and that’s what you do on stage - show off!
When it came together I started enjoying it more than I thought I would. Then it becomes your job and you have mortgage payments and things like that. It becomes more than a job and you've got to keep working. There's pressure as well, not a pressure to be funny but a pressure to find work. I had a great friend and mentor in Bob Monkhouse. He helped me out a lot in the early days and in particular my first appearance on the Royal Variety Show, he just looked after me all the time - a genius and a gentleman.

You enjoy your work?
I love what I do, to go out and do an Eric Idle script any comic of any generation these days would give their right arm to do this show. Its two hours of non-stop laughter.

What’s Todd Carty like to work with?
I love working with Todd, he’s deaf as a post in one ear so I have to make sure I'm on the right side of him when I talk to him. We’d both done the show before but not together, it’s lovely because we’ve formed a little partnership in the show. I do most of the talking between the two of us as he only has about eight lines but he makes every single one count. I can’t look at his eyes on stage without starting to laugh.

How would you sum up Spamalot?
Its just funny. It hasn’t dated, it changes on a nightly basis depending on whose in the news and what situation were in. Everything is carved and created around where we are. Its always bang up to date on topical stuff as well.

How long are you carrying on with Spamalot for?
Its open ended at the moment so who knows?

Have you got any other projects lined up for this year?
I’m going back on the road for a stand up tour in August but anything after that I’m not quite sure yet. I enjoy my acting but I like to keep my hand in with stand up as well.