Drummer Still On The Beat With The Tremeloes - Dave Munden Interview 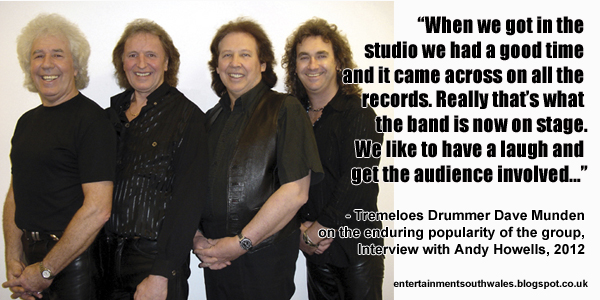 1960s pop legends The Tremeloes, famous for their hits Do You Love Me? and Silence is Golden will play St David’s Hall, Cardiff later this month. Andy Howells chats with founder member drummer Dave Munden about the band’s heyday.

“I’m the only one who has been in the band all the time, so I’m in every photo there is of The Tremeloes,” says drummer Dave Munden, who along with school friends Brian Poole and Alan Blakley formed The Tremeloes in Dagenham, Essex , around late 1958.

“Brian and Alan had a couple of Hofner acoustic guitars on which they used to sing Everly Brothers stuff,” remembers Dave. “I used to sing along with them and one day Alan said ‘Do you want to join the band? We’re having a practice tonight around the greengrocer’s shop!”

“So I went over, he sat me down at the drum kit and got me to keep time with the music. I sang and drummed at the same time and that’s how I joined the band.”

Like most bands of the era, The Tremeloes, fronted by Brian Poole, did their apprenticeship on the live circuit. With several personnel changes and the arrival of Rick Westwood on guitar in 1961, the band auditioned for Decca Records on New Year’s Day 1962 and ultimately won a recording contract over four lads from Liverpool known as The Beatles.

Brian Poole and The Tremeloes released several singles before scoring chart success in 1963 with their upbeat version of Twist and Shout.

The next single, Do You Love Me? toppled The Beatles’ She Loves You from Number One. “It was unbelievable,” says Dave. “To get a number one record in the charts was fantastic.”

Further personnel changes saw Brian Poole go solo in 1965 and Chip Hawkes join the band when they transferred to CBS records. The Tremeloes returned to the top of the charts in 1967 with Silence is Golden and maintained chart success with several feel-good hits including Call Me Number One and Here Comes My Baby.

“We were in great spirits,” remembers Dave, “when we got in the studio we had a good time and it came across on all the records. Really that’s what the band is now on stage. We like to have a laugh and get the audience involved.” Dave says The Tremeloes were “always a good live band” and this has helped their popularity endure over the last five decades.

The Tremeloes’ current tour will be the last to feature Rick Westwood, who is due to retire from the band. Dave describes Rick, who sang the original lead vocal on Silence is Golden, as “a great guitarist – a one off. He plays like nobody else.”

Fans can catch Dave and Rick along with Jeff Brown and Joe Gillingham as The Tremeloes in The Sensational 60s Experience at St David’s Hall, Cardiff on October 25, 2012. Joining them will be Herman’s Hermits, The Ivy League and Union Gap uk.